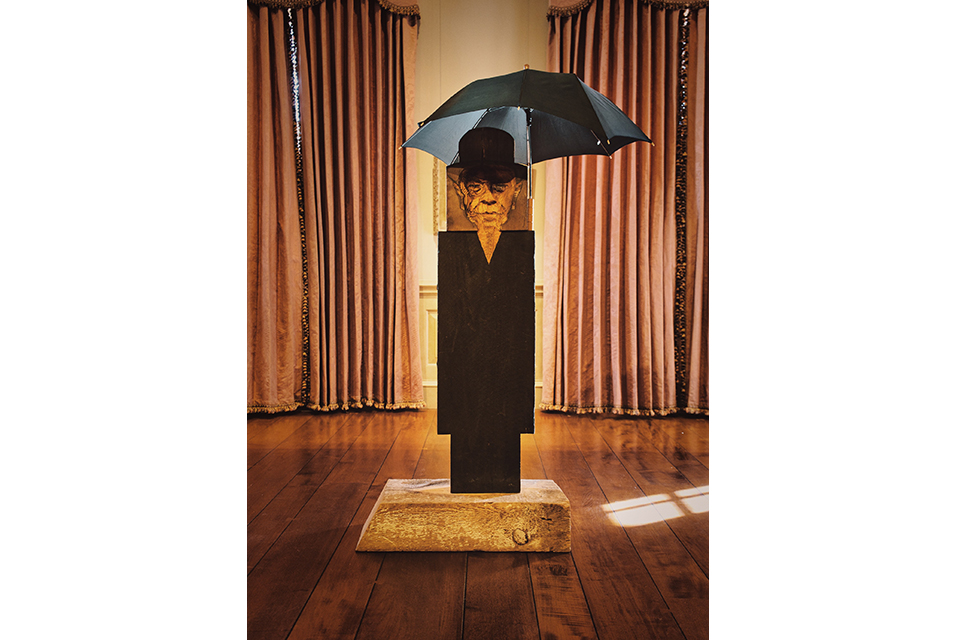 A sculpture by Marisol, an artist who was lumped in with the Pop art movement of the 1960s, has found a home at the Philbrook Museum of Art in Tulsa, Oklahoma. Magritte II (1998) is an almost life-size rendering of one of Marisol’s influences, surrealist artist René Magritte. The work will be exhibited to the public from Wednesday 16 February.

Marisol, who died in 2016, was recognized for creating irreverent sculptures from reclaimed wood and found objects. Often these sculptures depicted public figures and people with whom she had close personal ties. Throughout her career, she made works after other artists, including Pablo Picasso, Georgia O’Keeffe, Willem de Kooning and Bishop Desmond Tutu. Despite her close ties to the New York art scene, she continues to be under-recognized compared to many of her peers.

In 1998, Marisol produced a series of portraits of Magritte which satirized the surrealist, who died in 1967. In each iteration, a truncated rendering of Magritte made from a wooden board shows the painter holding an open black umbrella and donning a bowler hat – symbols that recurred throughout his paintings. Marisol’s group of works, slightly different from each other, were presented together in 1998 at the Marlborough Gallery in New York.

On the back of the sculpture, Marisol made a self-portrait. In a statement, Rachel Keith, assistant director of curatorial affairs at Philbrook, said the gesture could be read as Marisol “placing her own signature on the work, but also establishing a very literal connection between herself and Magritte”.

In recent years, a multitude of museum exhibitions have renewed Marisol’s attention. In 2014, the Memphis Brooks Museum of Art organized a major survey of the artist’s work which received critical acclaim. (This show also traveled to El Museo del Barrio in New York.) Last year, an exhibit about the relationship between the Pop art sculptor and Andy Warhol, titled “Marisol and Warhol Take New York,” opened at the Warhol Museum in Pittsburgh, Pennsylvania. In 2020, the Albright-Knox Museum in Buffalo appointed Julia Vázquez as curator to help lead a major exhibition and research initiative dedicated to Marisol, who posthumously donated her extensive estate to the museum in 2016.