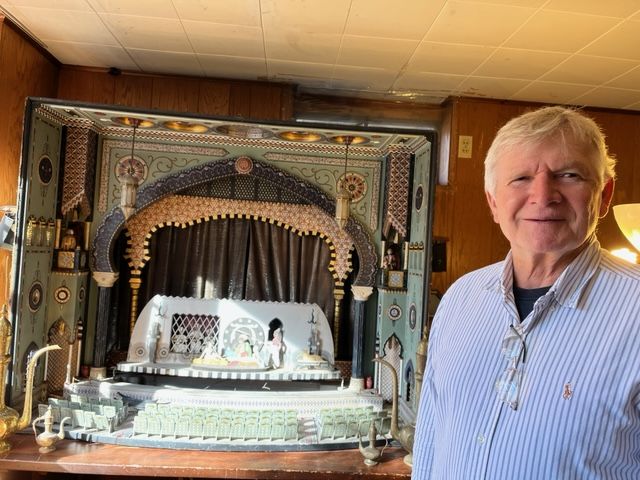 The replica of the theater seeks a new home; people celebrate their birthday

HUDSON – A miniature, meticulously detailed ‘Arab theatre’, created by the late Charlie Groves in the 1960s, is looking for a new home.

Former Hudson resident Bob Gorey, who ‘fostered’ theater in the basement of his Andover home for many years, says ‘It’s time to bring Charlie’s masterpiece back in his hometown”.

Officials from the Hudson Public Library and the Hudson Historical Society said they have no space to display the icon, although they wish they could. It is hoped that a local, private or public, pre-kindergarten or preschool, or other Hudson home can be found to house and/or display the colorful theatre, which dates back to the days of elegant “movie palaces”. . ”

Charles Groves (1905-2003), manager of the old Hudson Theater and caretaker of the Hudson Public Library, spent 20 years researching and building on the five-by-four-foot miniature icon, working in his shop at the back of the Odd Fellows building, which is now occupied by Hudson Art & Framing.

The creation was inspired, in part, by the 1942 movie “Arabian Nights”.

Grove’s creation screen features the skyline and desert of “Moonlit Baghdad”, along with over 300 small stones and 2,000 “diamonds” for ornamentation. There are two rows of 70 miniature seats.

Bob Gorey and his brother Chris Gorey recall a real theater movie presentation in the mid-1960s at the Hudson Public Library.

Longtime friend Lorene Jean of Hudson Art & Framing remembered Charlie as a Hudson icon, walking daily until late in life and organizing a banjo band while managing the Hudson and Maynard Theaters.

In the late 1990s, before entering a local nursing home, Charlie requested that the theater be sent to the home of Bob Gorey, whose parents, the late Herb and Joy Gorey of Hudson, were among his greatest fans.

They were honored with a “COVID-crowd” party at Diane’s niece’s house, complete with birthday cake. Their son Andrew and his wife, Danielle, from Westborough, brought them a birthday meal from 110 Grille on November 21.

Diane, a retired Hudson teacher of 37 years, and Bill, a Stow native, were married at First Federated Church in Hudson.

A Vietnam War-era Navy veteran, Bill retired after working for Digital Equipment Co. and Lifeline. Their son Michael resides in Florida. The couple have four grandchildren.

The New York Times December 3 crossword puzzle was built by our granddaughter, Claire Rimkus, of North Grafton. This is her second NYT puzzle and she has also contributed several to USA-TODAY. A 31-year-old medical examiner, she is the daughter of Peter Rimkus, originally from Hudson, Coventry, CT, and the late Dianne Rimkus.

John P. Rio Jr., 90, of Hudson, was announced to have passed away on November 25, 2021 at his home in Tucson, Az. He was a member of the Hudson High class of 1949 and has many local survivors, including his brother, Alfred Rio of Hudson.

The Hudson Winter Farmer’s Market will be open from 11 a.m. to 2 p.m. at Hudson Town Hall on Saturday, December 18, with many great product choices from area vendors.

An exchange store at the Recycling Center at 300 Cox Street will be open Saturday, December 18 from 9 a.m. to 1 p.m., for free items and also donations. The volunteer team offers free seasonal decoration, toys, games, etc.

All donations must be in working order.

Mrs. Veronica Eklund has joined the staff of Linden Street School as a first grade teacher.

Staff Sgt. Robert W. MacDonald was a jet aircraft mechanic in Vietnam with the US Air Force.

Federal mediators were called when a general strike halted production at all Raytheon Co. factories.

Army Sergeant. Norman “Red” Taylor, back from Vietnam, was the guest of honor at the Veterans Day Parade.

MERRY CHRISTMAS to all Hudson Happ’nings readers and contributors!