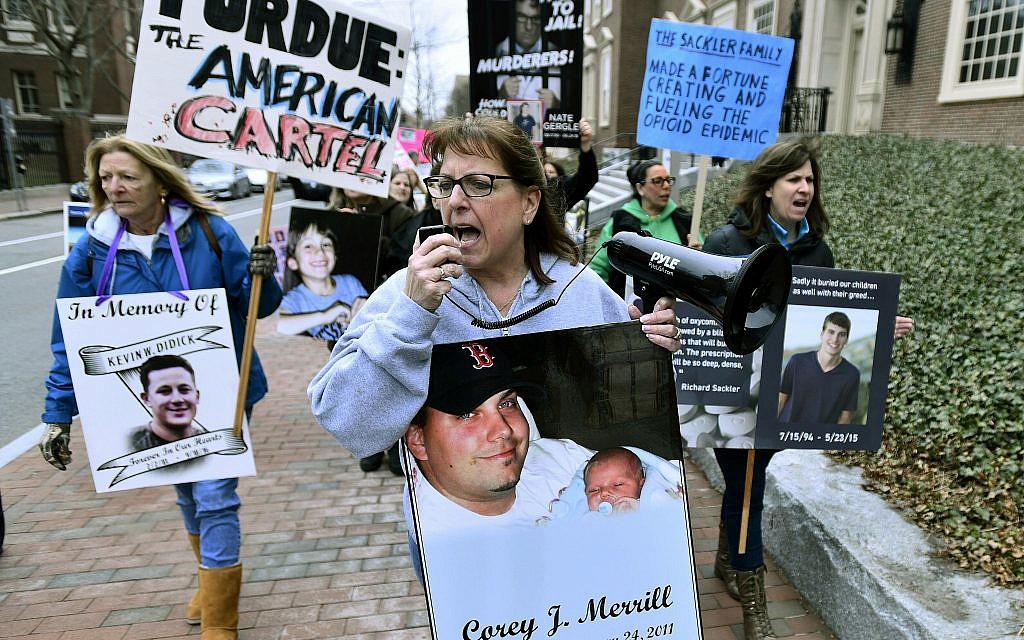 AP – Ask the CEO and chairman of the Metropolitan Museum of Art if he will accept money from the Sacklers, the billionaire dynasty known for its ties to drug company Purdue Pharma, and the answer is somewhat complicated.

On the one hand, it depends on which Sackler.

â€œThere are people who go by the name ‘Sackler’ who have nothing to do with the Purdue Pharma situation,â€ said Daniel H. Weiss. â€œIf this is someone related to the management of Purdue Pharma, we are walking away. “

Purdue Pharma recently filed for bankruptcy as part of a plan by the maker of OxyContin to settle thousands of lawsuits filed by state and local governments over the country’s opioid crisis. The Sacklers, who own Purdue, were listed by Forbes magazine in 2016 as one of the 20 richest families in the United States and have contributed money to cultural institutions around the world.

In this August 17, 2018 photo, family and friends who have lost loved ones to OxyContin and opioid overdoses leave pill bottles in protest outside the headquarters of Purdue Pharma, which is owned by the Sackler family, in Stamford, Connecticut. (AP Photo / Jessica Hill, File)

The family rebuffed accusations that Purdue played a central role in the deadly outbreak, but legal battles have led some to sever ties with loved ones. The allegations have also intensified a debate over the extent to which museums should rely on the support of the wealthy and what conditions, if any, should be placed on their donations.

By registering, you accept the conditions

For museums in the United States in particular, where private funding can represent more than three-quarters of an annual budget, the decision to remove a wealthy contributor like the Sacklers or Jeffrey Epstein is sometimes a choice between upholding their stated values â€‹â€‹and being able to communicate these values â€‹â€‹through the art they defend.

“We live in a populist age, with a greater awareness of economic and political inequalities and a closer scrutiny of the rich,” says David Callahan, author of “The Givers” and founder of the online site Inside Philanthropy. “This greater scrutiny is expected, but it creates a lot of anxiety in nonprofit institutions with close ties to the American upper class.”

Over the past year, the Tate museums in London and the Guggenheim museums in New York are among those who have announced that they will no longer accept money from the Sacklers. Other institutions did not completely distance themselves, citing legal reasons and other factors. 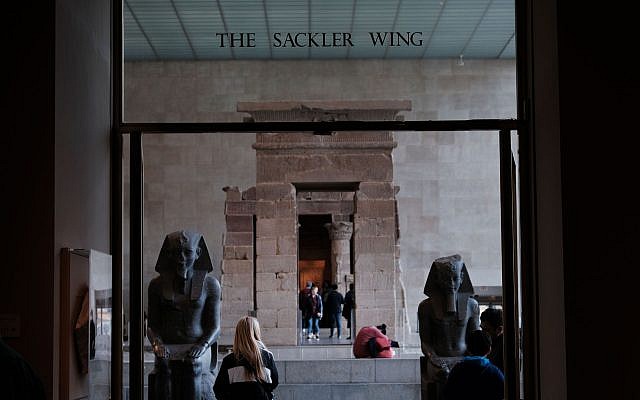 Last spring, the Met announced that it would no longer accept gifts from members of the Sackler family closely associated with Purdue Pharma, but would allow donations from those not involved. Various Sacklers have denounced Purdue Pharma and called for some form of atonement.

The Met isn’t renaming its wing Sackler, because, Weiss said, it’s a contractual obligation. In Washington, the Smithsonian Institution has rejected calls to remove the Sackler name from the Arthur M. Sackler Gallery, which opened in 1987 after Arthur Sackler, who died the same year, donated more than 1,000 works. Asian art and millions of dollars for construction.

In a recent statement to The Associated Press, The Smithsonian said the gallery was named in “recognition of Sackler’s generous donation” and that the grant agreement requires the Smithsonian to retain the name “in perpetuity.”

The Smithsonian added that it was no longer “looking” for money from the Sacklers and that in 2011 it changed its giveaway policy so that a name could be changed after 20 years or when a space suffered its next. major renovation.

Smithsonian chief spokeswoman Linda St. Thomas said that control of the exhibits “rests solely with the Smithsonian” and that all gifts over $ 1 million are reviewed by management and approved by the board of directors. administration. 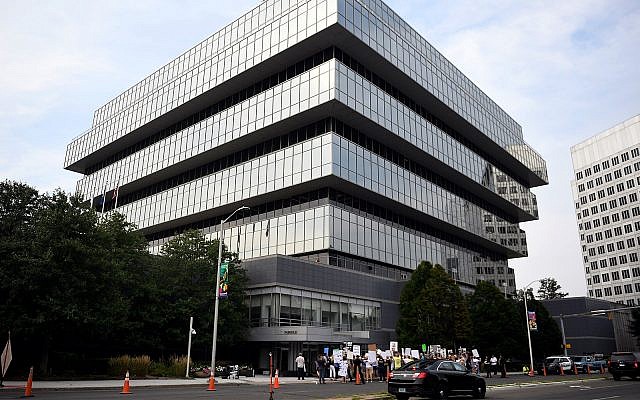 Family and friends who have lost loved ones to OxyContin and opioid overdoses march outside the Purdue Pharma headquarters in Stamford, Connecticut on August 17, 2018 (AP Photo / Jessica Hill, File)

Harvard University, where protesters asked the school to rename the Arthur M. Sackler museum, also cited contractual reasons to retain the name and said the Sacklers donated money before development of OxyContin.

Philanthropy has a long history of conflict in the United States, dating back to when steel mogul Andrew Carnegie spent huge sums of money on libraries, schools, and other educational institutions. even as its workers protested against their low wages.

More recent examples include the School of Cinematic Arts at the University of Southern California, which rejected $ 5 million from Harvey Weinstein, and the Field Museum in Chicago, which ceded its financial portfolio to fossil fuels.

The definition of a toxic donor “is vague and keeps changing,” Callahan said. He cited Warren Kanders’ resignation from the Whitney Museum board after protests against his company’s sale of tear gas used at the US-Mexico border and elsewhere. Previously, Kanders’ business had not been a reason to be removed from the board.

â€œBut in this busy political climate, the way a wealthy individual is viewed can change quickly,â€ Callahan said. 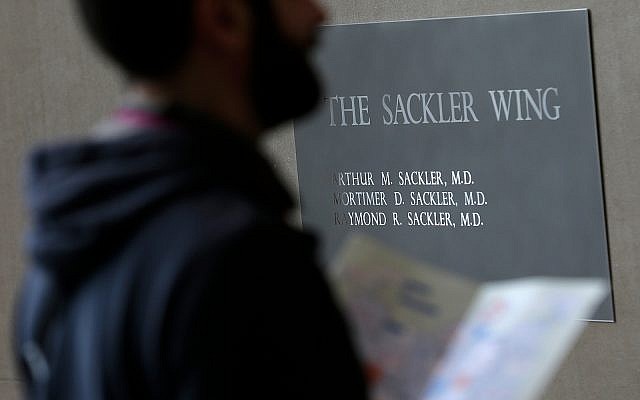 A sign with Sackler’s name at the Metropolitan Museum of Art in New York, January 17, 2019 (AP Photo / Seth Wenig)

Weiss wonders if the Met would now accept money from Carnegie or his fellow magnate John D. Rockefeller, both infamous for their monopoly business practices. The Met has received millions of controversial donors, including David H. Koch, who died last month. Koch and his older brother Charles led right-wing benefactors vilified by environmentalists and others for questioning man-made climate change and opposing efforts to fight global warming by reducing gas emissions Greenhouse effect.

David Koch was on the Met’s board of directors and contributed $ 65 million to the renovation of the plaza opposite, named David H. Koch Plaza by the Met in 2014. The museum at the time defended the decision, which led to protests, claiming it was a fitting honor for Koch’s â€œgenerosity and level of commitmentâ€.

The Met does not “administer a partisan test for our donors – rather we accept gifts from those seeking to join in the advancement of our mission,” Weiss said.

â€œEqually important,â€ he added, â€œto recognize that the administration of gift acceptance requires continuous reviewâ€¦ as the landscape of cultural values, laws and facts changes, and a line claire is often an imprecise instrument. “

The 5 best art exhibitions to see in London in December