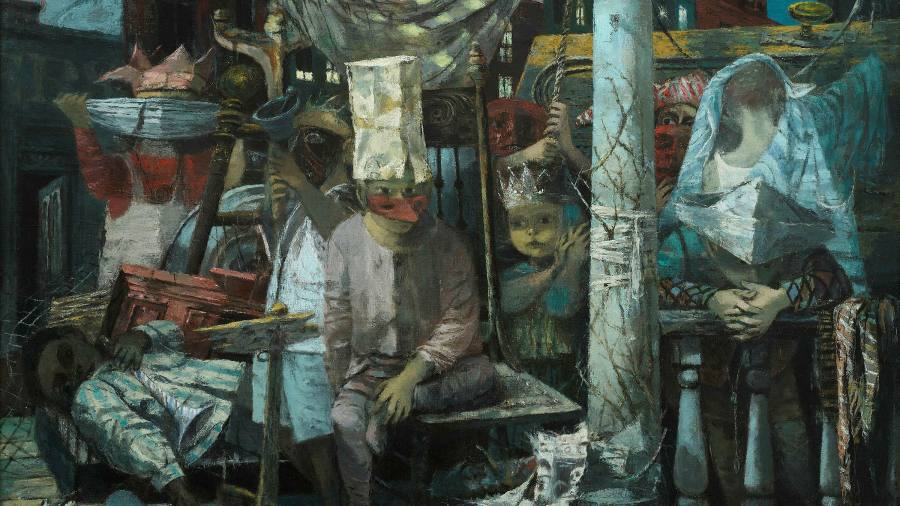 Delayed by Covid and then by an onslaught of institutional scruples, the Philip Guston retrospective that has finally opened at Boston’s Museum of Fine Arts presents Guston’s work as a disreputable peep show, too harsh for discerning viewers.

In September 2020, the four hosts of the traveling exhibition – the National Gallery of Art in Washington, the Museum of Fine Arts in Houston, the Tate Modern in London and the Museum of Fine Arts in Boston – jointly postponed it to 2024 , fearing that its strong imagery and themes of racial justice may seem inappropriate or offensive in the climate following the murder of George Floyd. One of the curators, Mark Godfrey of Tate, publicly opposed the decision, was suspended for overstepping and eventually left the museum. Now the series is reborn, two years late and two years early, and it’s a triumph of inconsistent hypersensitivity.

Upon entering, visitors pick up a card announcing that “You have every right to feel your feelings throughout this exhibit” – about as pointless a statement about art as any institution could imagine. Once through the portal, there is more whispering condescension. If you can’t stand the sight of a man in a white sheet, the path through the exhibit offers a way out: skip straight to the disembodied limbs, covered in the pink of raw meat and imbued with Guston’s vigor and terror. .

In addition to being clumsy, the tactic is in total contradiction with the philosophy of the artist. For 50 years, through various stylistic phases, he reaffirmed his faith in not looking away. You can hide behind a mask or try to look away, says his work, but cruelty and violence are inevitable. The series turns that claim on its head: Sure, evil exists, but that doesn’t mean you have to see it.

Conservatives are particularly nervous about some obvious symbols of oppression, especially Nazis and Klansmen. Behind a roll-up lid (open at your own risk) is a newspaper clipping from the 1940s, in which visitors to an exhibit confront photographic evidence that the Holocaust really happened. Guston saw the original images in St Louis and they haunted him for the rest of his life. Some viewers may have extreme reactions to the content of this show, but the installation does not really protect them.

The exhibit succeeds anyway because all that low-budget tidbit melts in the blast furnace of Guston’s imagination. It opens with its most explosive surprise, the first masterpiece “If This Not Be I” (1945), which depicts a clandestine game, performed by children wearing hats, masks and crowns. Their faces are hidden, their identities obscured, and the mysterious rite they perform portends a savage future. Buildings and towers loom behind the little mummies, which seem to have emerged from alleys and dumpsters to inhabit a landscape of bric-a-brac: crumpled newspapers, broken pieces of furniture, a light bulb, bits of twine and rope. Light stains their sinister doings and gestures, creating depth in an otherwise frieze-like composition.

Two years later, Guston produced “The Porch II”, an equally dense body melee, apparently inspired by photos of corpses piled up in concentration camps. Once again we see a herd of children, a coagulated ballet of wrapped hands, feet and faces. They are pushed to the surface by a blood-red wall, their movements blocked by a pair of cruciform staffs. One figure hangs upside down, another hangs from a rope, a third flogs himself with a pair of sticks. We can’t figure out exactly what’s going on, but the atmosphere is unmistakably dire. In this first phase, Guston develops a repertoire of techniques and motifs: masks, bulbs, clocks, studded boots. From his idol Max Beckmann, he acquired a taste for terror, compositions full of numbers, a penchant for probing his own nightmares and a private iconography of trauma.

Guston was explicit about his influences and outspoken about his feelings. A few abbreviated musings are printed on the walls, but for the most part the curators seem so distracted by the challenge of how to deal with Klan images that they overlook his life story – an odd choice for such a faith-based artist.

Guston’s family – still the Goldsteins, then – immigrated from Ukraine to Canada (where Philip was born in 1913) and then to Los Angeles. His father, once a blacksmith, made his living collecting scrap metal, fell into depression and committed suicide. Ten-year-old Philip found him hanging from a rope as “thick as a hawser”, he later recalled. The misfortune was not over with the Goldsteins: a rolling car crushed his older brother’s legs and made Philip a connoisseur of suffering for life.

Guston chose to mask that pain — with drink, behind pointy hoods, under thick layers of pigment — and dwell on it, too. In 1948’s “The Tormentors” he begins to mask the horrors under an abstract canvas. There are hints of evil in the white interlacing of a Klansman’s hood against an ominous red and black palette. Working for months, he continued to add more paint, burying the depravity under an opaque impasto.

Over the next two decades, Guston attempted to free himself from the burden of memory and stick to a safe, distilled abstraction. Feathery brushstrokes congeal into pulsating flecks or burst into ribbons of color. Eventually her gestures become denser and more defined, and again we get the sense that something solid and hard is trying to pierce the floating curtain.

Eventually, Guston came to think of abstraction as an inexcusable form of escapism. “When the 1960s came around, I felt split, schizophrenic,” he later said. “The [Vietnam] the war, what was happening in America, the brutality of the world. What kind of man am I sitting at home, reading magazines, going into a frustrated rage about everything – then walking into my studio to adjust a red to a blue. . . I wanted to be whole between what I thought and what I felt.

Guston’s mature Klansmen debuted in 1970 as cartoon characters rendered with deliberate crudeness. He wanted to shake up his fans, and he succeeded. After an exhibition of new work at the Marlborough Gallery in New York, friends stopped talking to him. Times reviewer Hilton Kramer wrote a review titled, “A Mandarin Pretending to be a Stumblebum.” Only a few observers understood where the artist was coming from. “Guston is the first to have risked a fully developed career on the possibility of engaging his art in political reality,” writes Harold Rosenberg of The New Yorker.

At the MFA, a vestibule full of video screens sums up this awakening. Excerpts from Kent State, images from Vietnam, anti-war protests, Nixon speeches, the bloodstained balcony of the Lorraine Motel and other mnemonics of the rage and misery of this period parade past our eyes. As early as 1930 and for the rest of his career, Guston used peaked hoods as icons, not just of a racist organization or Jim Crow history, but of all the filthy vulgarity of violence, bigotry, hypocrisy and cowardice.

He found these qualities particularly abundant in the art world. “American abstract art is a lie, a sham, a cover for a poverty of spirit,” he wrote in his notebook around the time of the 1970 exhibition. to unveil. A lie to cover up how bad one can be. The man under the robe was whoever was guilty of these sins, starting with Guston himself. The Klansman is his alter ego.

Fury turned into brutal comedy. In “The Studio” (1969), a crimson curtain rises over a hooded figure holding a paintbrush with a bloody fist. The abstract inquisitor, absolute in his demand for purity, is literally caught in the act of painting a fellow man. It is a double self-portrait of the artist’s psyche, where atonement and self-loathing clash. The museum reduces all this internal turmoil to an obsession with racism, but it lacks the depth of Guston’s explorations. “The idea of ​​evil fascinated me,” he recalls, “and much like Isaac Babel, who had joined the Cossacks, lived with them and written stories about them, I almost tried to imagine that I was living with the Klan. How would it feel to be mean?”

In asking this question, Guston refused the role of victim and insisted that we all recognize our own ability to inflict pain. Surely he would have yelled at a museum trying to keep the public from gazing at its worst instincts.