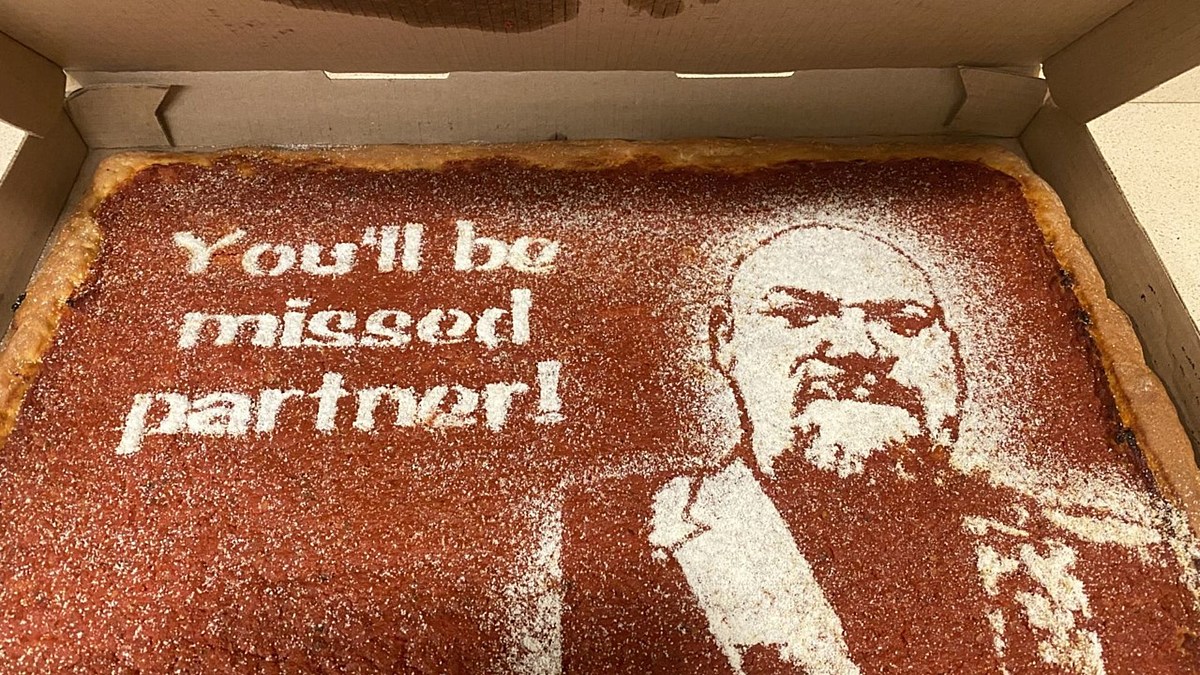 My daughter works at a large hospital in Philadelphia. Recently, a colleague of hers ordered a tomato pie for a colleague who was leaving. He is a huge pizza fan and prides himself on making his own.

So they ordered her a tomato pie WITH HER PICTURE ON IT! How do they do this? With parmesan!

The place is called Conshohocken Italian Bakery in Conshohocken, Pennsylvania, just outside of Philadelphia.

We searched high and low for a pizza place or bakery that does this in New Jersey and came up empty.

We’ve all seen birthday cakes with pictures for years, but a tomato pie with a logo or picture is a big step up.

Not sure if they have a patent on this process, but only in America can you get your picture on a pizza.

They have to use a special imaging/screening/pulverizing process and very finely grated, dry Parmesan cheese in the process.

I can only imagine the hand gestures you would get from a pizza maker or bakery in Italy if you asked or even suggested such a thing.

So we hope that a pizzeria or bakery somewhere in New Jersey offers such a masterpiece.

If you know of one, please let us know. Otherwise, New Jersey is a step behind our western neighbors in Pennsylvania in the pizza/tomato pie game.

It can’t hold. If George Washington had known he could get tomato pie with the American flag on it in Pennsylvania, he never would have crossed Delaware to New Jersey.

The views expressed in the above post are those of New Jersey 101.5 talk show host Dennis Malloy only.

You can now listen to Dennis & Judi — On demand! Listen to New Jersey’s favorite Best Friends anytime, anywhere, and any day of the week. Download the Dennis & Judi show wherever you get podcasts, on our free app, or listen now.

These are everyday expressions that only someone from New Jersey would understand. What else should be on this list?

Each state in America and its favorite type of cereal…

What would happen to NJ if we were attacked by nuclear weapons?

We used Alex Wellerstein’s NUKEMAP to see what would happen if a nuclear warhead hit New York, Philadelphia, Washington or New Jersey.

Models show what would happen during an air detonation, meaning the bomb would be detonated into the sky, causing extensive damage to structures and people below; or what would happen in a detonation on the ground, which would have the alarming result of nuclear fallout. The models do not take into account the number of casualties that would result from the fallout.