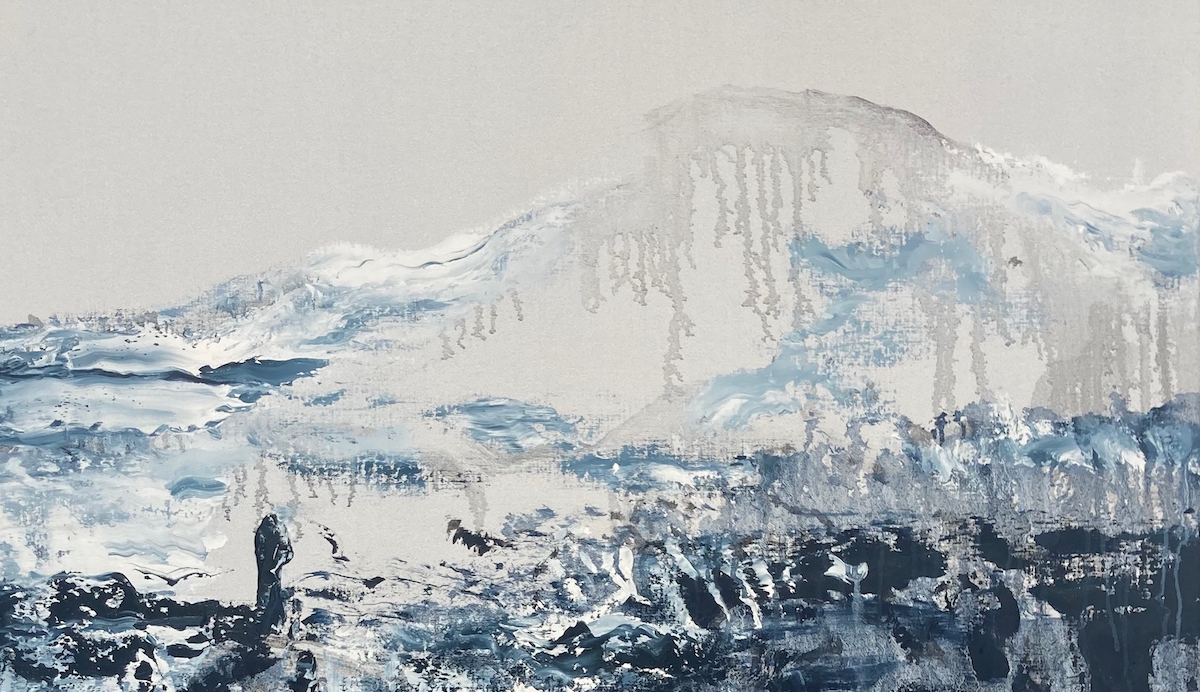 I first heard of Maggi Hambling through her polarizing public sculptures. A bust of writer Oscar Wilde lolls in a green granite coffin, smoking a cigarette and laughing at passers-by behind St. Martins in the Field in London. A nude silver-bronze statue of 18th-century feminist thinker Mary Wollstonecraft emerges from an undulating silver plinth, the sides of which stick out like floating hips, in north London. There is an irreverence in these sculptures, a cheekiness that denies one-dimensional worship. But there’s nothing sassy Real time, his first exhibition in New York, currently on view at the Marlborough Gallery. Instead, the swirling, gestural, and surprisingly moving landscapes, seascapes, and portraits offer darker reflections on climate change and death.

In indigo, black and gray, Hambling’s paintings blend elements of abstract action painting with unmistakable depictions of mountains, rivers and animals. “Edge XIX” (2021) greets visitors like an avalanche in slow motion. A mountain skeleton in the background, outlined in gray, slowly fades as bits of it, rendered by short, thick brushstrokes of indigo, tumble into the foreground. The mountain seems to melt before our eyes. More than countless statistics and documentaries, Hambling’s abstractions in Real time induce emotionally visceral responses to the impacts of climate change.

“Wall of Water I” (2010) creates a similar sense of creeping disaster, this time more like a tsunami heading towards the viewer. Pieces of yellow curve around black and blue, perhaps breathing a bit of sunshine into the darkness, in terms of color and subject matter. “Wall of Water XII” (2012) incorporates similar arch-like shapes, but with a bit of fuchsia to invigorate the blue.

A series of rectangular works line the gallery’s narrow first-floor corridors, including “Edge XIV” (2021) and the similar but more faded “Edge XV” (2021). The shape of these works, reminiscent of Chinese scroll paintings, follows the shape of their frame, creating a satisfying symmetry, though the pairing is slightly monotonous. The feeling of being in the path of a flood or an avalanche is invigorating the first few times, but the repetition loses its power by the tenth.

The exhibition reclaims this power on the second floor, with pieces such as “The Last Baboon” (2018), in which black finger-like lines stretch across the canvas, dissolving when they reach the edge. The theme of animals and their death reappears in “Abandoned Baby Elephant” (2019). Hambling’s brushstrokes suggest the animal curled up on itself for comfort; the loneliness is palpable.

“I never sought to be controversial,” Hambling said. Curly in 2021 sculptures that critics called “Wilde de Tussaud” or “insulting” to Mary Wollstonecraft. These works may be fun to debate, but their impact does not linger. Yet without being overly pedantic, Hambling’s paintings challenge viewers to consider what we will lose if humanity continues on its current path, and how much we have already lost.

Maggi Hambling: real time continues at the Marlborough Gallery (545 West 25th Street, Chelsea, Manhattan) through April 30. The exhibition was organized by the gallery.