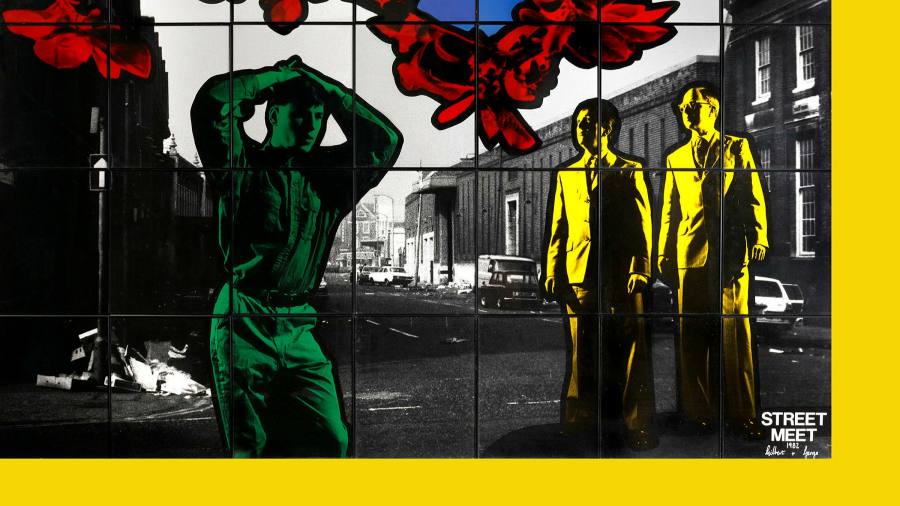 I expected, on entering the east London studio of artists Gilbert and George, to be something like a cathedral. After all, their work over the past five decades has repurposed the bright medieval aesthetic of stained glass for photo-collages of modern city life, their icons ranging from skinheads and bus shelters to sex workers and shit. While there’s nothing numinous about their studio, they don’t disappoint on the front of the icon: the first thing I see is a white wall covered in photographs, printed or torn from newspapers, of everything the world, from the Queen to burly rugby players to Chancellor Rishi. Sunak (several appearances).

The medieval is not a comparison that the duo, inseparable since their meeting at St Martin’s School of Art in London in 1967, recognizes, nor any other tradition. “We are not going down this path,” said Gilbert Prousch, 78. “All modern life looks more like our pictures, right? If you go to a Tesco, the whole design looks more like ours, don’t you think?”

We meet to discuss a moment in their career a little closer to space invaders than in medieval times: Gilbert and George figured in 1982 edition of the prestigious documenta 5-year art exhibition in Kassel, Germany, and the Thaddaeus Ropac Gallery will present works by them and other documenta 7 artists at Frieze Masters next week. In “Street Meet” (1982), a green young man poses much like Saint Sebastian in front of a black and white urban scene, while a yellow Gilbert and George stand stiffly like visitors from another planet.

They don’t seem inclined to dwell on this show, however, beyond Gilbert saying it was “very important” and “amazing” to them, without too many specifics. George is keen to highlight the freedom, humanism and recognizable signs of their work as a whole: “We realized as baby artists leaving St Martin [fellow students] all made beautiful shapes and beautiful colors and beautiful angles; they never discussed life or hope or death or sex or beauty or unhappiness or terror or fear, ever.

Their conversation is antiphonal, one picking up where the other left off. Gilbert follows George: “They all have a formalism — forms — and we never had that, from day one. We only have . . . the humanism of a person, the center of our art is that. The individual today, how he walks in life. It became our subject and it was quite different, I still believe it’s quite different from a lot of other artists. Their later photos included the artists spread out in bus shelters, newspaper posters (they stole 3,700 bills from London for inspiration) and postcard arrangements with the British flag.

Gilbert and George are keen to emphasize their difference from the attitudes and practices of other artists. For one thing, they dress in identical formal clothes. George wears a speckled orange suit, white shirt and hot pink tie with blue ravens today, Gilbert wears the same suit but in green and the same tie but in blue. Likewise, they disagree with much of the politics of the art world, as becomes clear when I ask about the gallery they set up near Brick Lane to show their work ( “the world of Gilbert & George”, as they call it) in perpetuity. Are they doing it because they don’t think other galleries, like the Tate, will pass them on to posterity?

Why does “wokeness” exclude Gilbert & George, pioneering queer artists? Gilbert: “Because right now it’s all black art, all women’s art, all this art and this art. Just go check out the Tate Modern I’m sure they don’t have a [Francis] Bacon. And let’s not even talk about the Tate Britain, where mainly British artists are exhibited, what Gilbert describes as “provincial” and which George absurdly compares to apartheid in South Africa. It’s definitely different from other artists. It also fits oddly with their longstanding “art for all” philosophy, which doesn’t seem to extend to art. by everything.

But you are represented by White Cube, purveyors of art to the rich.

Gilbert: “You have to sell works to continue. We love, what do you call it, capitalism.

George: “We’re not against anything, like all artists normally are.”

Gilbert: “They want to be billionaires but at the same time they call themselves socialists.”

I ask if it would be possible for an art student to settle in London today, as Plymouth-born South Tyrolean Gilbert and George did in the 1960s, and survive the university and then to pursue a career, given the high cost of living, post-Brexit visa difficulties and government budget cuts in funding art courses. George doesn’t buy it: “We would do the same, find the only place we could afford to live. We are only here because it was the cheapest place in London, that’s the only reason. It was £12 a month for any floor of any building in rue Fournier, the attic or the basement. (A house down the street sold for £6 million in March 2021; Gilbert and George bought theirs in 1972.)

George sees London’s bustling art scene as an advantage for today. “When we were young artists, there were two galleries in London – there was the Marlborough or the Kasmine and that was it. Gilbert: “Now there are millions and millions of artists out there.” It is, of course, a transformed art world.

But the city has changed with it, and throughout our conversation I found it perplexing how Gilbert and George can boast of their keen observation of London – George puts on the table three pieces of string he found in the street after breakfast, fresh material for a work of art – but also unaware of how many of its inhabitants experience it. Perhaps it is precisely that their local universe consumes all of their vision.

As our conversation draws to a close, Gilbert and George show me some ink signs they made to be sold to benefit the Serpentine Gallery – NO WAY. KISS ME. FUCK ‘EM ALL (“Our general approach to life,” George says) — and show me through their impeccably restored 18th-century home. I ask to take their picture to remember what they are wearing; they oblige, standing a little awkwardly in the doorway, and it seems to me that in many ways Gilbert and George’s world doesn’t go much beyond their doorstep.