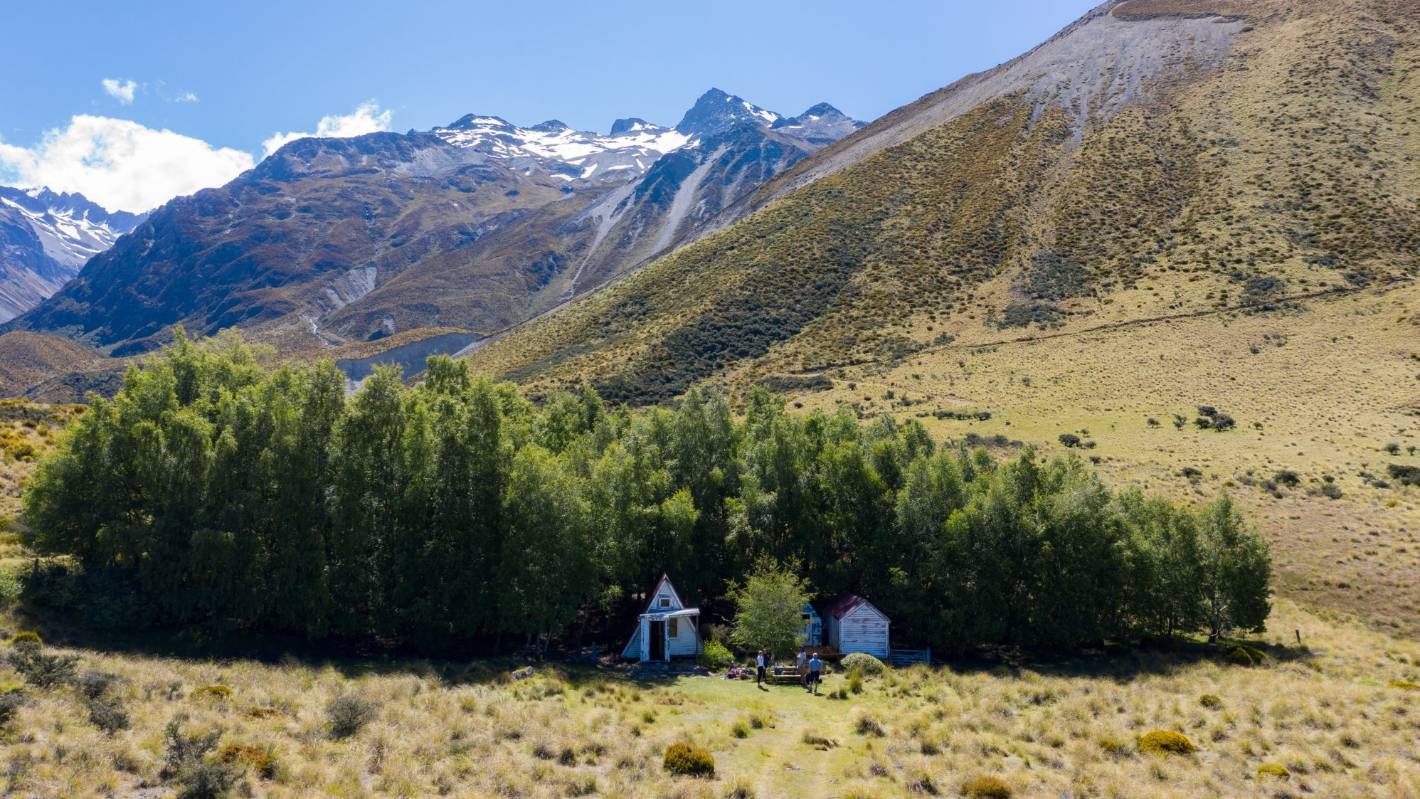 Three humble huts that once housed scientists, soil and a young family have been lovingly restored to take on a new role on a Mackenzie High Country station.

The former Department of Scientific and Industrial Research huts will serve as a historic touch stop for walkers on the Glentanner Station Heli-Hike, the Ivey family’s latest chain of tourist offerings on their 4,000-acre property bordering Aoraki/Mt Cook National Park.

The cabins were officially reopened on Thursday with honored guests Josiane Archer, 91, and her son Robert.

The Iveys worked with an exhibit design firm to develop information panels, photographs and audio recordings based on interviews, research and historical documents that now hang in the cabins, and restored decor, carefully preserved furniture and memorabilia.

READ MORE:
* Mackenzie Country: The only area Kiwis must see before the borders open
* The slow and sorry end-of-term review
* Consideration of climate change in the revised Aoraki/Mt Cook National Park management plan
* “Meet the market you have,” says Mackenzie Holiday Park

Huts at the unpowered field station housed scientists and researchers, including the late soil scientist Anthony (Tony) Archer, who died in 2010.

He lived and worked in the huts for weeks on end for almost two decades, with his wife Josiane and their children Robert and Nicole.

Robert said he and his sister spent many happy months in the huts as children.

He said Thursday’s launch was quite emotional for him and his mother.

“It was a great place to grow up.”

He had fond memories of their time at Glentanner – long-drop toilets, off-grid living, boiling water for baths, strong winds and “learning and figuring out what Dad was doing”.

“It was a very big part of Dad’s scientific career, and our whole life quite frankly.”

He said the Iveys were very kind to the family, and he particularly remembers his father and Ian Ivey being an unlikely pair.

“Dad was a bit mad as a mad academic to be fair, and Ian was the tough mountain man who made his money shooting deer in Rakaia Gorge to buy the Glentanner resort, so it was an interesting interaction between these guys. .

“I vividly remember sitting in the farmhouse listening to the two discuss.”

Archer said the launch of the field station cabins reinforced the importance of her father’s work in grassland management and soil science, while Josiane said the visit brought back memories.

“They had all the crockery we used and the pots and pans still there, beautifully hung up and ready to go, the bed below was the same, even the same curtains, which must have been 50 years old.”

The family left New Zealand in 1982 when her husband was posted to Pakistan with the Food and Agriculture Organization of the United Nations.

When they returned in 2000, the first place Tony went was Glentanner, Josiane said.

“It’s also about the relationship between the Archers and the Ivey family. Because the Ivey family was doing the development of the farm basically at the same time as they were doing the research, so there was a lot of communication between the two, and they became great family friends.

She said one of the huts served as a “home base,” another held soil samples, and the third was the office, which also housed additional bunks for researchers.

“We kept it as is, but we added a bit of interpretation and quite a few photos, and we have the audio of Josiane and Robert talking.”

“They would come up and do the work and the research, look at the storylines and what had happened since their last visit, take the tapes, and that would go on for a while, and then they would go back to Lincoln.”

She said Archer’s influential 1976 doctoral dissertation, Pedogenesis and vegetation trends in the elefulvic and eldefulvic zones of the northeast Ben Ohau Range, New Zealand, meticulously typed by Josiane, was one of the results of Archer’s high country research.

Ivey said the idea of ​​the helicopter ride occurred during the Covid-19 lockdown.

“I thought for God’s sake, what are we going to do? We have this track, let’s use it – the first season we had around 500 people, so it was very popular.

Hikers are transported by helicopter to a high point on the sprawling property overlooking Lake Pukaki, then descend on foot.

“They walk about two hours before they get to these huts, so we stop for a little morning or afternoon tea. We thought this was definitely something we could add to the hike to make it more interesting.”

Outgoing Mackenzie Mayor Graham Smith helped with the launch, taking the tougher route – walking the two hours to shelters from the start of the hike.

The hut exhibits were a great initiative, he said.

“I take my hat off to the Iveys. I’ve always said it’s about telling the stories of the Mackenzie – there are so many to tell. It’s not just about the mountains, it’s about the people and the history and sharing those stories,” he said.

Glentanner resort has been run by the Ivey family since 1957. The huge high mountain track at the entrance to Aoraki Mount Cook National Park has long branched out into tourism.

Besides sheep, cattle, cattle, deer herding and finishing, a merino stud farm and farming, the Iveys have several tourist offerings, including the Glentanner Holiday Park with motel units, campsites and motorized, and a base for fixed-wing aircraft and helicopter flights. .

Build the (gingerbread) house of your dreams