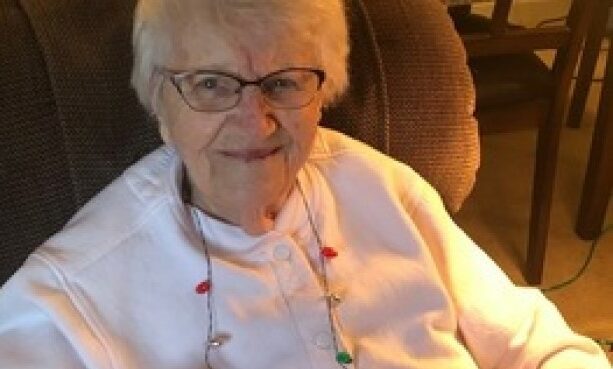 She was born in Clinton, MA on June 8, 1931, the daughter of the late Freeman and the late Florence (Richardson) Blenkhorn. Arriving early and weighing just three pounds, she was the first newborn to be rescued by Clinton Hospital’s brand new infant incubator unit. She graduated from Hudson High School with the class of 1950.

Growing up, Dot enjoyed horseback riding, swimming, playing guitar, and singing with her cousin Pauline and her family during her summers in Barre, Massachusetts. She loved to play the piano and dreamed of going to the music conservatory to become a concert pianist. Although it proved unaffordable, she took lessons from Professor Alfred N. Yesue and became a talented player.

In 1952, Dot took a job at the A&P grocery store in Marlboro. Almost immediately, she noticed a shy, handsome colleague. As Jack mustered up the courage to ask Dot out on a date, she surprised him by making the first move. “Do you want to go to the drive-in with me?” she asked. Jack couldn’t say yes fast enough. Together since, they celebrated 67 wonderful years of marriage on January 9.

Dot worked part-time at various retail stores while raising their three kids, who blew her away! She made sure they participated in all the activities they loved, including baseball, baton, band and cheerleading, and was always there to cheer them on. As an avid Grammie, she enjoyed spending time with her cherished grandchildren and great-grandchildren, attending numerous sporting events, recitals, graduations and family celebrations – camera in hand!

One of her favorite jobs was managing the photo department of the former Rich’s department store, where she “developed” a love of photography. A master at capturing memories, she has created hundreds of lovingly designed photo albums for family and friends to cherish for years to come.

Dot picked up ice cream at the popular Filmore Ice Cream Stand and played catcher for the Hudson Women’s Softball League. The family often vacationed on Cape Cod in Falmouth at “Castle in the Clouds” on Sippewissett Beach. They fell in love with the area and eventually moved to Maravista Avenue, where Dot and Jack lived many happy years. They held summer barbecues after each Falmouth road race where all were welcome.

She was a die-hard Red Sox fan whose all-time favorite player was, well, everyone! She loved to play every type of game imaginable. Whether it was Cards, Marbles, Scrabble, Aggravation, Yahtzee or Mexican Train, you were up for a challenge and she rarely lost. Dot enjoyed building puzzles, especially when others joined in, and created many masterpieces. She enjoyed knitting and crocheting, making dozens of blankets for her family and friends. Dot was also the queen of Word Search and performed until her dying days.

While in retirement, Dot and Jack lived in Cocoa Beach and later in Melbourne, Florida. Still active in their Florida communities, they enjoyed playing Bunco and attending shows at the Playhouse. They returned to their hometown of Hudson in 2019. Dot’s faith in God was boundless and never more evident than during the illness and death of her son Bobby just three years ago.

Whether it’s a warmly written note, a specially selected birthday card, or a batch of freshly printed photos sent to your door, Dot never misses an opportunity to make sure you feel special and loved. As her yearbook puts it, she was “small but high-spirited… carefree and carefree… witty and well-loved, and sure to succeed.” Dot’s passion for life will always remind us that hope is eternal and the best is yet to come.

The family would like to thank their dedicated helpers, Helen and Jeffrey, and the staff and nurses at Faith and Family Hospice, and the Artisan in Hudson, for their loving care of Dot during her final months. .

Ms Condry’s Christian funeral mass will be celebrated at Immaculate Conception Church, Marlborough, on Saturday April 2 at 11 a.m. The burial will be private.