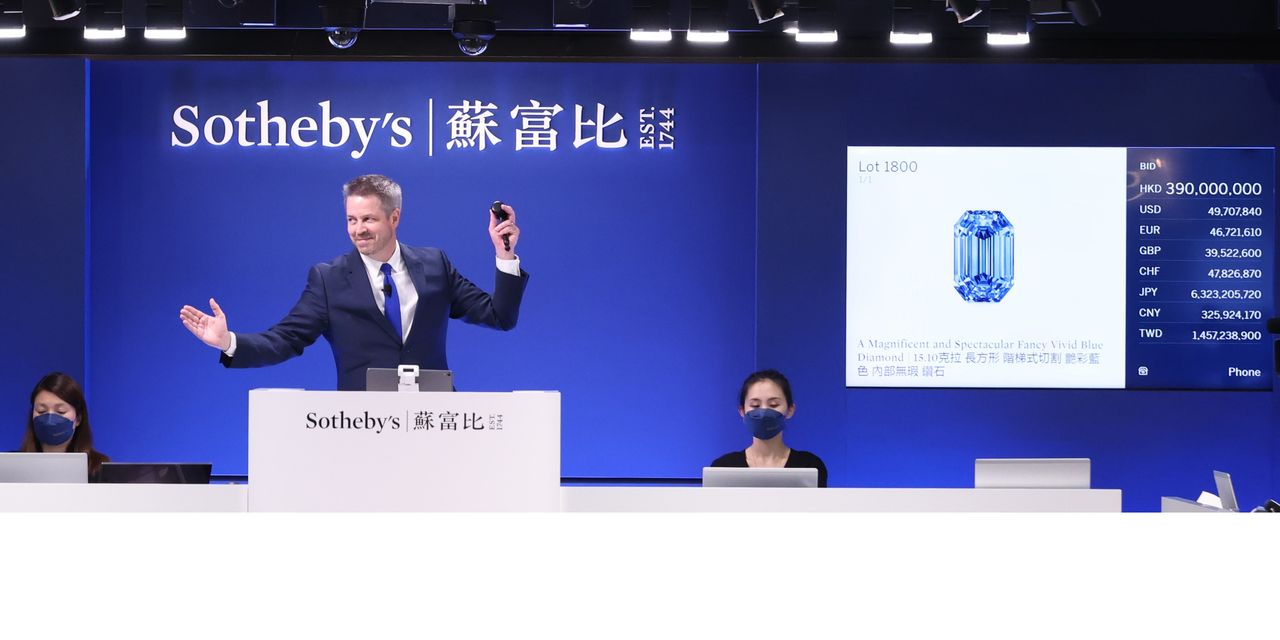 
“De Beers Blue”, a 15.1-carat fancy vivid blue diamond, sold for 451 million Hong Kong dollars ($57.47 million) at a Sotheby’s auction on Tuesday night in Hong Kong, marking one of the highest prices ever for diamonds of any color on the open market.

The diamond, the largest of its kind to be auctioned, attracted four bidders. After an eight-minute bidding battle, the gem went to a customer on the phone with Wenhao Yu, president of jewelry and watches at Sotheby’s Asia.

“It’s hard to imagine a diamond that exemplifies the term ‘vivid blue’ better than this exceptional stone,” Yu said in a statement. “It is fitting that a diamond of this caliber – now the third most valuable diamond of any color to be auctioned – launches our first major jewelry auction of the year.”

The final price, well above its pre-sale estimate of HK$380 million, was just short of the current record of $57.54 million for a blue diamond, achieved by the 14-year-old “Oppenheimer Blue”. .62 carats at a Christie’s auction in May 2016 in Geneva.

The highest price fetched by a diamond of any color was HK$553 million for the Pink Star, a 59.6-carat oval-shaped fancy vivid pink diamond, sold in April 2017 at Sotheby’s Hong Kong.

Masterpieces Offered at Evening Auction Sold Within or Above Estimates

Ahead of the auction of a single lot of ‘De Beers Blue’ on Tuesday night, Sotheby’s held its annual spring auction of modern art, featuring masterpieces by Western artists, such as Pablo Picasso and Marc Chagall, and Chinese artists such as Chen Yifei, Wu Guanzhong and Zao Wou-Ki.

The top lot, Picasso’s 1939 portrait of his lover and muse Dora Maar, sold for HK$169.4 million, against a pre-sale estimate of HK$138 million. The portrait was the first depicting Marr to be offered in Asia, Sotheby’s said when announcing the offer earlier this month.

One of the flagship lots of the contemporary art sale, Jean-Michel Basquiat
water worshiperwith an estimate of between HK$62 million and 93 million, however, failed to sell at Wednesday night’s live auction, according to Sotheby’s website.

Several of Basquiat’s paintings will be featured in this year’s spring sales at major auction houses amid a boom in his works. His 1982 triptych Portrait of the artist as a young wreck will be offered at Christie’s May sale of contemporary art in New York, with a presale estimate of over $30 million. Phillips, on behalf of renowned entrepreneur and art collector Yusaku Maezawa, will auction Basquiat’s Untitled, 1982 on May 18 in New York, which is expected to sell for around $70 million.

Highlights of the Sotheby’s Contemporary Art Sale in New York

The performance of the contemporary art market will be put to the test again at Sotheby’s evening auction on May 19 in New York.

Although the full contents of this sale have not yet been revealed, two masterpieces, both estimated between $40 and $60 million, have been posted on the auction house’s website.

One is Cy Twombly’s large scale painting, Untitled, 1969, an example of the artist’s essential Blackboard paintings. Formerly kept at the Gagosian Gallery, it is offered by an anonymous collector from California.

Oil on canvas by Francis Bacon Study of the Red Pope 1962, 2nd version 1971was acquired by a European private collector from Marlborough Fine Art in Zürich in 1973. The current owner is a descendant of the anonymous collector, according to the Sotheby’s website.