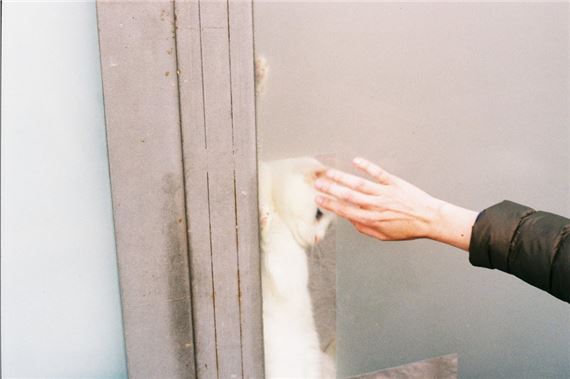 Bimbo is a photography exhibition in the hall of the Fundació Miró, which accompanies the temporary exhibition Paul Klee and the secrets of nature. It takes as its starting point the passion for cats shared by the dancer and photographer Nora Baylach (Granollers, 1994) and the Swiss-German artist Paul Klee (1879-1940).

This fascination is linked to the admiration Klee felt for felines as animals that are not bound by the same gravitational limitations as humans. In the same way, a dancer’s body can attain some of the motor qualities of cats, which are beyond the abilities of most people.

The title of the exhibition refers to Bimbo, one of the many cats that Klee kept as pets throughout his life, and which he photographed with true devotion. Nora Baylach studied these photos and was inspired by them to create a photo session – in the street – devoted to a single cat: an anonymous cat with a white coat and eyes of different colors.

For this new multiple portrait of this new Bimbo, Baylach has decided to return to analog technology, fully aware of the fact that film reels are almost impossible to find and do not waste. This involved finding the best way to use the available film and deciding when to take the best picture possible after a long wait; an expectation that allowed him to carefully study the gestures of the animal, to approach it and get to know it as if it were a model photographed naturally. The result is a sequence of 18 images, 18 moments, some of which are very reminiscent of the many drawings Klee made of his cats.