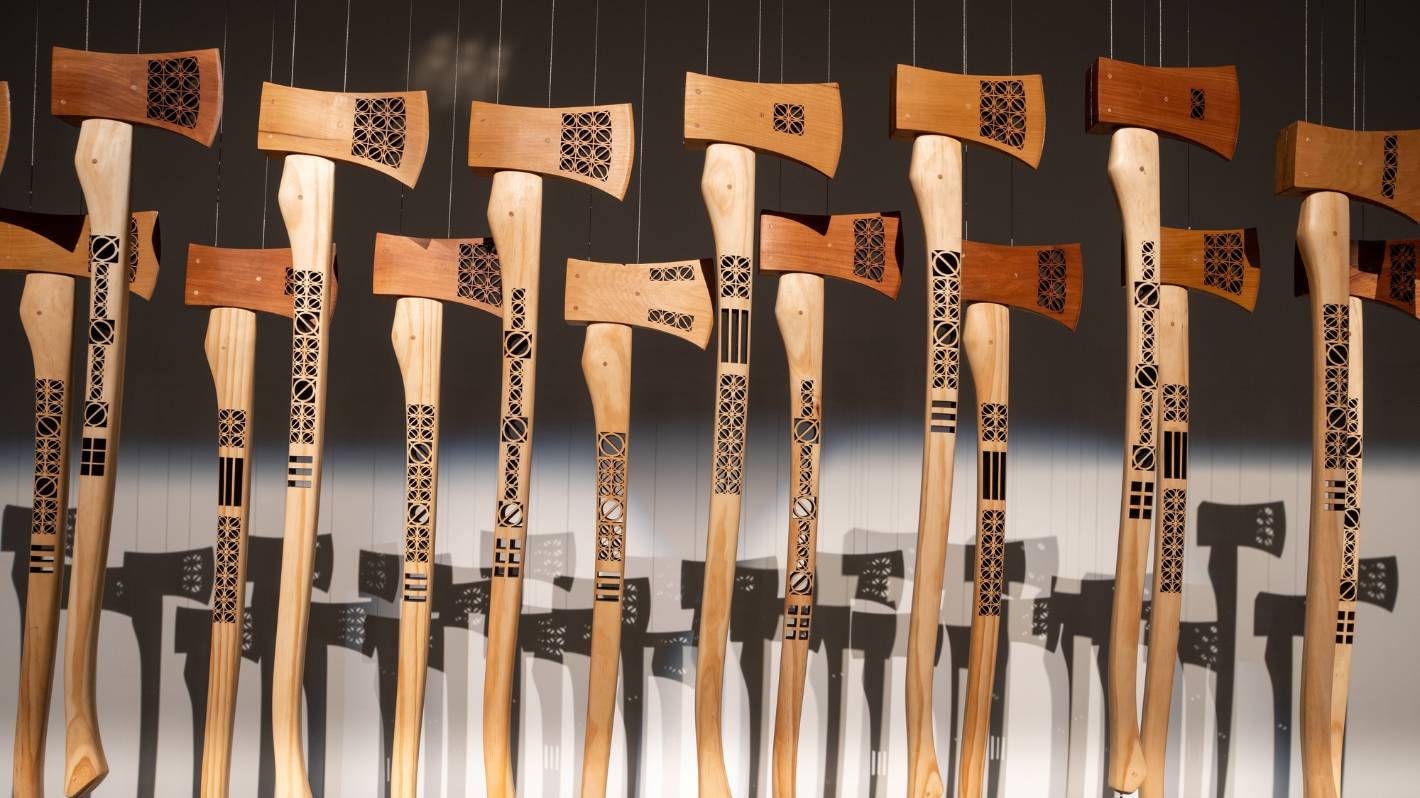 In July’s list of the best exhibitions in Canterbury, Warren Feeney recommends Graham Bennett AXIS + AXES as a must-see treasure, discovers that a disaster is more than an act of nature or a choice of God, and that after a ten-year absence, senior painter and printmaker Stanley Palmer is back to exhibit at the Center of arts Te Matatiki Toi Ora.

AXIS + AXES is an exhibition-inquiry into the artistic practice of sculptor / printmaker Graham Bennett, revealing unseen studio work completed and in progress. Along with Bennett’s access to the Museum’s Pacific collection and influence on his work, the exhibit also features ceremonial paddles, clubs and adzes, their persuasive and confrontational presence, raising awareness of the complex and unresolved conversations between indigenous and colonial histories, past and present, making AXIS + AXES an inescapable treasure of an exhibition on several levels. Until October 25.

Recent immigrants from Latin America, the paintings of Estefania Mondaca and Nanenko Olmos in Another view offer alternative and different perspectives on the house. Their subjects, humans and animals, inhabit and seek solace in a suburban world to which they seem as accustomed as they are disconnected. They document familiar domestic spaces that somehow refuse to welcome our presence. July 6-10.

Southland sculptor John Wishart’s Abandoned works encompasses the dilemma of an artist doing work that is hardly ever finished, and also recognizes the workers of Ocean Beach Freezing Works, its closure in 1991 and the loss of 1,450 jobs. Wishart describes his sculptures in Abandoned works as possessing an â€œin-betweenâ€, the ocean transforming and revealing the â€œuncertain beautyâ€ of the vestiges of industry. Until July 23.

Guest curator at the Jonathan Smart Gallery, Eugene Huston brings together a selection of works that consider the idea of â€‹â€‹”catastrophe” in its broadest context, more than an act of nature or a choice of God, but fundamental to it. human condition. At the heart of The song stays the same is the power of Armageddon as a subject open to all imaginary possibilities, circumstances, behaviors and realities. Until July 17th.

Now in its third year, A day in the life of is a traveling exhibition of works of art by sex workers that impart information and knowledge about life in the industry. It aims to change perceptions about female sex workers as portrayed in mainstream media and popular culture and, as an art exhibition in a gallery, deals with the enduring presence of the male gaze. July 6-18.

John Badcock’s Impressionist paintings and Susan Badcock’s hand-colored photographs constitute a group exhibition of two artists sharing familiar territory in attitude and subject matter. In Foraging, the two artists participate in the act of researching, bringing together and revealing the light, flora and fauna of the region and of the house they know so well. July 4-25.

The painter and printmaker Stanley Palmer returns to the Te Matatiki Toi Ora Arts Center, after having previously exhibited in the southern quadrant of the Gingko / Salamander Gallery (1980-2011), which has now disappeared. Palmer’s return is welcome news, with his exhibition of new paintings providing an opportunity to experience his finely tuned response to many conversations about the land, roads, hills, and surroundings of Aotearoa. Until July 25.

Lecturer at the School of Fine Arts of Ilam and award-winning book designer Aaron Beehre The Venetians is a series of large injected prints and one-prints masters in risography, their subjects, framed in a dramatic and evocative light of Caravaggio against the dark. From a historical and dramatic point of view, Beehre’s subjects are “Venetians”, ever changing and capricious. Until July 17

The physics room has reopened its library. Last seen when his gallery was located at 49-59 Worcester Blvd, the library’s restoration also comes with Light enough to read, an exhibition on writing as a means of communication beyond words. Artist Fiona Connor responds, orchestrating exchanges on form, volume, mass and surfaces, connecting and contrasting objects on the floor and walls of the gallery. Until July 25.

Installation by multimedia artist Nathan PÅhio and sound artist Luke Shaw The mist and the horizon presents an act of separation and reconciliation, a not insignificant task in the convoluted spaces of the north gallery of the CoCA. Citing a creation story NgÄi Tahu, Pohio’s light installation, moderate yet complete in its expanse of North Gallery spaces, is complemented by Shaw’s sound work, bringing together a resonance of country music duets, sharing a note of undulating fa to the organ and establishing a and a persistent presence throughout the space of the gallery. Until August 28.