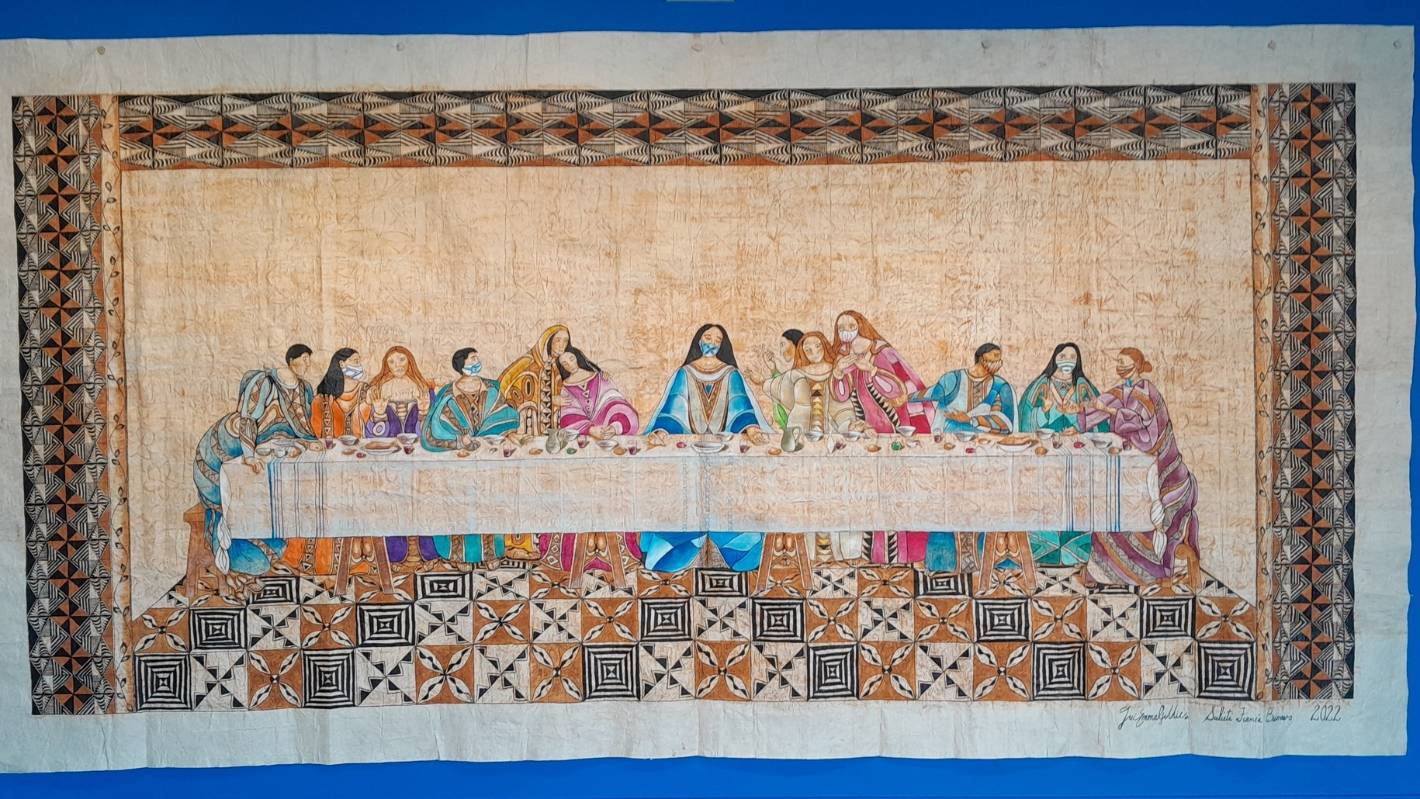 The gallery’s installations feature prominently in Warren Feeney’s list of notable October exhibitions, while those of Leonardo da Vinci The last supper is getting a makeover, with a new title and a life in Aotearoa.

Fiber Gallery is a space dedicated to Pacific art with studios, exhibitions and workshops. His current exposure is The Last Kai, by mother and daughter Tui Emma Gillies and Sulieti Fieme’a Burrows, revitalizing Leonardo da Vinci The last supper (1495) as a tapa cloth painting, large scale at 5 meters long. Additionally, the 12 male apostles are reduced in number, sharing the table with the women. Until October 21.

Sculptor and designer Tim Main’s longstanding commitment to the arts and crafts movement centers on the order and beauty of native plants. Yet, in Here for eternity, he researched historic paintings on barns in the United States by Dutch farming communities, observing that their flower and star symbols represent the small and the infinite. Main’s subjects for his current exhibition include clematis, also representing an important relationship between the earth and its inhabitants. October 4-21.

The figures, animals and creatures in Kathryn Madill’s paintings are always an invitation to learn more about their world and the landscapes they inhabit. Yet the questions of who and where are these subjects, what are they doing, and why this sense of uneasy affirmation establishes a first-person relationship with each work in a multifaceted conversation, as uneasy as uplifting. October 11 to 31.

Gently ribbed is a sculpture in soft fabric, its colorful materials commanding the ground floor gallery of CoCA, taking the visitor on an unplanned walk through shifts in direction and possibilities. Affirming a physical presence in its lattice patterns, Gently ribbed is an installation described by Whetū as an “invitation to reflect on Maori cosmology and to journey through life”. Until October 15.

KALOUGATA: underground is a multimedia installation and performance by Jahra Wasasala, after being artist-in-residence at the Macmillan Brown Center for Pacific Studies. At Ōtautahi Christchurch, there are few comparable installations/performances that so comprehensively embrace the diversity of disciplines or media represented by KALOUGATA, its shifting projections, its otherworldly voices, and its perpetual distractions and mutations that are decidedly 21st century. Until October 23.

The Visual Arts Program at Te Ara Ātea Library is organized by Program Coordinator Chloe Cull, and Pahu! (burst, explode) brings together the work of five artists integrated into the spaces of the library. They include Clara Wells’ expansive wall projection Search and Return, its seven projectors extending over a 20-meter wall, particularly appreciated by children who chase its ever-changing dots. Until January 31.

The Canterbury Museum is tidying up its artifacts during the first stage of its five-year redevelopment, encouraging residents to treat its collections as an exhibition of favorite objects. Everyone will have at least one memorable object somewhere: Christchurch Street, Discovery, the Antarctic Gallery, heritage buildings or the Blue Whale Skeleton. Canterbury Museum director Anthony Wright stresses that “this is not a goodbye – just see you later”. October to early 2023.

Organized by Trish Morant, a local potter who says she has “honed her skills with [the] Canterbury Potters Association for many years”, the exhibition clay works features ceramics from 21 members across three generations. It’s an impressive line-up, including potter Frederika Ernsten, a former tutor now in her 58th exhibition year, and painter and ceramist Phillipa Trumic, who joined in 1997. Until December 24.

Inviting comparison with the landscape paintings of Colin McCahon and Rita Angus, Waikato-born Barbara Tuck Crossing the delirium, reviews two decades of his work and his tangible and troubling realities about the earth and our relationship with it. Moreover, and to his credit, Crossing the delirium is also accompanied by texts and commentaries on Tuck’s practice by selected authors. October 15 – March 26, 2023.

Bruce Springsteen’s acclaimed 1982 album, Nebraska, has been described by Rolling Stone Magazine as “stark, spooky acoustic demos”. The popularity and increasingly legendary nature of NebraskaSpringsteen’s music is celebrated in a series of works by tattoo artist and graphic designer Tom Kerr to mark the 40th anniversary of Springsteen’s album. Until October 28.